There are several reasons for pruning a tree or a shrub. Why? To remove dead wood, which should be cut back to healthy wood. Also remove small twigs that intersect each other. Removing branches that have flowered gives greater vigour to the new branches that will flower in their turn. You need to remove too strong a concentration of branches in the middle of the plant, preventing air and sunlight from coming through. Pruning achieves a pleasing shape and encourages the growth of more flower-bearing shoots.

Sometimes a shrub has not been pruned and has grown considerably. The centre of the shrub is bushy and the branches are tangled. It is therefore necessary to intervene as soon as the flowering period is over. Remove the older branches (the wood on these is darker) and reduce the number of younger branches by half.

To retain the bushiness of evergreen shrubs with fine leaves trim them every spring but only the young wood. Routine pruning of a shrub, whatever the species consists in freeing the centre of the plant, and removing its weak, dead or badly positioned branches. Shortening the branches that are too straight will make them branch out.

Another reason for pruning is to allow plants beside or below the shrub to flower. If you allow your larger shrub to grow the smaller species growth is stunted and their blooms will not attain full potential. An example of this is my variegated Weigela as pictured below. The plants were being squeezed out by the larger shrub and were not blooming profusely, but after pruning you will notice the vast difference. 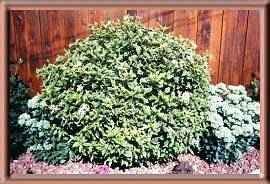 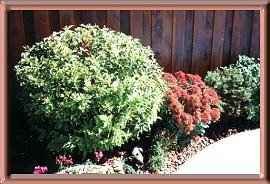 Most climbing plants manage quite well without any human intervention. Usually the only work they require is training them up a support and removing their old branches every four to five years. Summer flowering clematis requires pruning. In the fall prune clematis back to approximately three feet. This is a tip I found most effective and learned while watching a gardening show. Each year I have faithfully pruned my plant to the three-foot height as recommended and the following summer I am rewarded with a healthy, colourful vine.

Hedges unlike shrubs are cultivated in isolation. Their shoots are pruned back short and at frequent intervals. The result is quickly visible. Instead of putting out long, vigorous, well spaced out branches, these plants produce a mass of twigs all their dormant shoots growing at the same time. The result is dense, compact, and as one would expect from a hedge a structure which can form a barrier against the wind, passers-by and noise.

Trees and shrubs have different growing periods and habits. To achieve the best results from your hedge, you should know when to prune.